High Growth Hormone (HGH) fragment 176-191, a research chemical developed for lab research is very effective in controlling the metabolism of fat metabolism. The peptide mimics the secretions without impairing the normal functioning of cell proliferation and blood sugar. It effectively breaks down the body fat, boosts energy discharge, invigorates the fat oxidation and most importantly bumps up body mass.

HGH Fragment 176-191 boosts lipolysis, slow down the lipogenesis process, and shows antibiotic tendencies. This happens because the peptide interacts with the cytoplasm and the endoplasmic reticulum membrane. This has been found to inhibit the degradation of lysosomes—mainly responsible for the breakdown of waste materials.

In simple language, the Fragment 176-191 is a part of Human Growth Hormone peptide. This abridged version of HGH has been specifically designed to boost fat-burning. It invigorates the release of fats from adipose tissues into the blood to be consumed as energy. So, if you are a bodybuilder with this peptide you can achieve fat-burning goals quicker. This high tech peptide is used by weight lifter and other fitness enthusiasts. Since it helps in maintaining optimum fat balance, it is one of the most popular among bodybuilders.

Unlike other peptides, which degrades the sensitivity to insulin this has been found very effective in maintaining the blood sugar balance. Since it reduces the chances of onset of fat deposition, it finds better applicability among bodybuilders.

Interestingly, it won’t kill your appetite as is the case with most of the fat-burn treatments. As a bodybuilder you need to boost energy push along with high appetite, this peptide gives you the perfect balance. Since this substance doesn’t compete for HGH receptors you remain free of the worry of hyperglycemia.

A Scientific study that has been based on animal test subjects has shown that Fragment 176-191 can be hypothetically linked to a host of different benefits.

Just like any other peptide infusion process, you may feel the discomfort of injection, sleepiness or laziness. However, advantages far overweigh its minor side effects. So, if you are a dedicated bodybuilder and want to have better control over your fat-burning, better bone density, and utilize protein effectively then make HGH Fragment 176-191 part of your regimen. 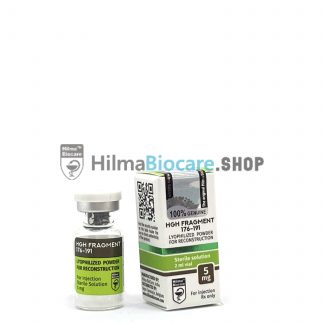